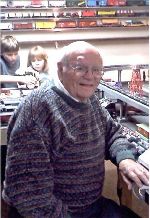 He was born on September 1, 1934 in Winsted the son of Charles and Esther Seeman Gutzmann.

Rodney took over the family’s homestead in Winsted Township after the death of his father and brother. He engaged in dairy farming there for many years.

He enjoyed his family gatherings at the cabin on Lake Ann.

Rodney was a faithful, life long member of St. John’s Evangelical Lutheran Church in Winsted. Through the years he held many church offices.

His hobby was model railroading which he enjoyed very much.

Preceded in death by his parents: Charles & Esther Gutzmann and by two brothers: Arden & Wayne Gutzmann.

Funeral services for Rodney Gutzmann will be held on Tuesday, April 23rd at 11:00 A.M. at St. John’s Evangelical Lutheran Church in Winsted. Pastor Mark Loder will officiate. Molly Loder will be the organist.