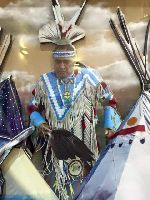 He attended grade school at the Stephan Indian School in Stephan, SD and Tekawitha in Sisseton, SD.
He graduated high school from North High in Minneapolis, MN. He then attended college at North Dakota State University in the Veteran’s Outreach Program in Fargo, ND.

Robert worked as a Native American Outreach Counselor at North High School in Minneapolis and the Gilfillin Center in Bemidji, MN. He went on to work as a bus driver, secretary and teacher’s aide (all at one time!) at Ponemah Elementary School in Ponemah, MN. Robert then worked as a Dietician at the VA Medical Center in Fargo, ND where he retired in 2015.

He enlisted in the United States Army on January 18, 1968 and served with the 82nd Airborne Division with specialized Pathfinder, LRRP training.

Funeral services for Robert St. John will be held on Friday, February 15, 2019 at 10 AM at the Sisseton Wahpeton Oyate Community Center in Agency Village. Spiritual Leaders will be Arnold Williams and Tom Bullhead. Dakota Nation will be the Drum Group. Interment at St. Matthew’s Cemetery in Veblen, SD.