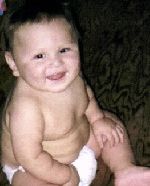 Robert Jr. affectionately known as “Fat Man” was born on August 24, 2007 in Redwood Falls to Robert Azure Sr. and Teresa Dakota. He enjoyed spending his days with sisters Chyla and MaKayla and big brother Devon. He enjoyed rubbing food in his hair, playing in the tub with his siblings and saying “Dad”, his only word.