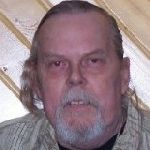 Visitation Information
AT THE CHURCH
Tuesday, October 21, 2014
One hour prior to Mass

After high school he served in the Army in Vietnam. After his military service he worked as a welder in Cokato for many years. His journey led him to Howard Lake where he lived out his years in retirement. He loved to go fishing on Mille Lacs, fly fishing and ice fishing on Howard Lake and loved to hunt and had a passion for the outdoors. He enjoyed spending time with his family and grandchildren teaching them about the outdoors and how to live off the land.

He enjoyed spending time with fellow veterans at the VA Medical Center in St. Cloud and Minneapolis.

He is survived by his children, Robert Habisch, Jr. of Appleton WI, Rebecca (Jeff) Holmquist of Cokato, Mandy (Ryan) Koski of Brooklyn Park, MN and his grandchildren, Hunter, Hayden, Hope, Halle, Kaleb, Ashton, Riley and Koda; other relatives and friends.

Services for Robert will be on Tuesday, October 21st at 10:30 am at Holy Trinity Catholic Church in Winsted, MN with visitation starting at 9:30am and burial to follow at the cemetery. There will be a luncheon following the burial at the church.