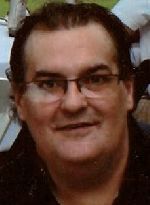 Robert “Bob” Earl Mosher Jr., age 52 of Winsted passed away on Saturday, August 24, 2019 at Fairview-Southdale Hospital in Edina. He was born on April 24, 1967 in Minneapolis the son of Robert E. and Betty J. (Buhrman) Mosher. Robert was formerly employed as an accountant. He was a manager/cook and accountant for Old Country Buffet. Robert later cooked at CashWise Foods. He was also a real estate agent. He enjoyed his daughters! Robert enjoyed painting figurines and watching sports.