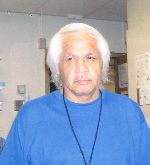 He was born on May 11, 1953 in Hibbing, Minnesota the son of Steve and Frances Marie (Johnson) Littlewolf.

He honorably served his Country in The United States Navy.

Richard was formerly employed as a custodian at The Minneapolis Convention Center.

He enjoyed visiting with family and friends and going to the casino. Richard was a very organized person! He loved life, more towards his later years and he was a man of very few words. Richard also enjoyed collecting coins.

Honorary Casket Bearers will be Hennepin County Medical Staff, all his brothers and sisters and The Augustana Health Care Center.