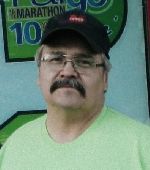 Richard was born on August 25, 1958, to William and Jeanette (Seaboy) Varns in Sisseton, South Dakota. He grew up in Sisseton where he graduated from Sisseton High School in May of 1976. He excelled in his academics and sports. After graduation, he enlisted in the National Guard Reserve where he received the Army Achievement Medal, Distinguished Service Medal, Armed Forces Reserve Medal and the Meritorious Achievement Award. He was promoted to Sergeant.
After leaving Sisseton, Richard went to work for AGE Construction out of Pierre, South Dakota, as an oiler, welder, and mechanic. He returned to Sisseton in 2000 and was employed by Fuel Inc for 16 years.
Richard enjoyed being outdoors, and especially enjoyed taking long walks with his wife Lucy. He was quite the hunter and fisherman. He was also a great cook could make you a dish you would not soon forget. Some of his hobbies included trapping, welding, and going to movies and concerts. He also enjoyed visiting with family and friends. Richard will always be remembered for his sense of humor, generosity, and a caring heart for everyone; especially his love for family.
Richard is the proud father of one daughter, Jacenta Varns Milk, and sons, Weston Quinn, Richard Varns Jr., and Matthew Varns. He also is the proud grandfather of seven grandchildren. Richard was joined in marriage to Lucy Cloud on November 1, 2016. They shared many fond memories together.
His siblings include Darlene (Morgan) Redday, Delight Robertson, William Varns Jr., Joyce Crawford, John Varns, and many nieces and nephews. He will be greatly missed by all who knew and loved him.
He was preceded in death by his parents William and Jeanette Varns, his brother, Robert Seaboy, and his nephew, Morgan Redday Jr.