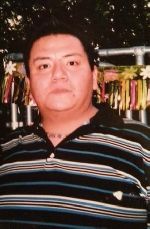 Richard James “Sugar Bear” Little Wounded, (Okish Kiyape) “Yells For Him”
Born on May 6th, 1975 in Minneapolis, MN
Began his Journey to the Spirit World June 9th, 2013 in Minneapolis, Minnesota.

Richard/Sugar Bear, age 38 was raised in both the Cheyenne River Reservation in South Dakota and Minneapolis, MN. He followed his Lakota and Ojibwa traditional ways of life, he participated in Sundances and Ojibwa ceremonies. He received his Lakota name Okish Kiyape from Chief Fools Crow at a Green Grass Sundance. He was a friend to many people who will miss his loving friendship and companionship. He was a son, brother, nephew, uncle, grandson who will be deeply missed by all who were fortunate to have known him in this lifetime.

An all night Traditional Wake will be held on Tuesday, June 11th beginning at 5:00 pm at Church of Gichitwaa Kateri 3045 Park Ave in Minneapolis. Services conducted by Clyde Bellecourt. On Wednesday at Sunrise, we will travel with Rick to Dupree, SD where a two night wake will be held on Wednesday and Thursday night with Burial Ceremony all at The Dupree Community Center and interment Tribal Community Cemetery in Dupree, South Dakota on Thursday, June 13th at 10:00 A.M.