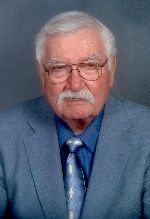 A Mass of Christian Burial will be held on Friday at 11:30 AM at Holy Trinity Catholic Church in Winsted. A visitation will be held AT THE CHURCH on Thursday from 4-8 PM. A KC Rosary will be recited at 6 PM, an American Legion Ritual at 6:45 PM followed by parish prayers at 7:30 PM. Visitation continues at the church on Friday morning from 10:00 AM until time of mass.

The Chilson Funeral Home of Winsted is proud to have served the family.