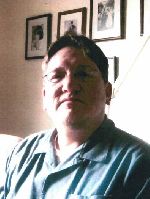 Ricky was an original IHS baby, born on August 26th, 1973. He attended Peever Elementary School (K-5), and was a proud Peever Panther. He was then a Sisseton Redmen for his middle and high school years. Ricky loved playing football from 8th-11th grade. At the age of 19, he started working road construction with his uncle Marvin DeCoteau. His first job was at the Wilmot rest area, followed by jobs in Brookings, Oklahoma (3-4 years), and South Carolina. He worked construction until his last seasonal job in 2012 in Grand Forks. He then worked at the Casino, and most recently at Dakota Crossing Grocery Store. Not forgetting the seasonal jobs at Schiltz Foods.

Some of his favorite things were moonlight horseback riding and hunting in the quiet after a heavy snowfall. Ricky loved to laugh and joke with family, friends, and unsuspecting victims, and sitting around the campfire. He also enjoyed cooking, especially with Cari.

Richard is survived by six siblings. Colin (Linette) Owen of Peever, Liz Owen of Sioux Falls (Pierre’s finest correctional), Julie Owen of Flandreau, Robert (Pam) Owen of Baltic, Patricia Feather of Sioux Falls, and Ronnie Goodsell of Old Agency, and his companion of many years, Cari Ironheart. Ricky never had any children of his own, but he was proud to parent his nieces and nephew; Silas, Angela, and Jyssica Feather. He is also survived by several other nieces and nephews.