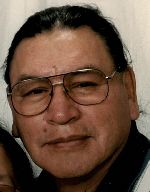 Rev. Michael L. Simon – “Akicita Cistinna” 77, of Sisseton SD, passed away peacefully on Thursday, January 31, 2019 at the Sanford Hospital in Fargo, ND. Michael was born on September 25, 1941 in Sisseton SD to Paul and Amelia Harris-Simon he lived most of his life in the Sisseton area until he went to high school at Flandreau Indian School where he graduated. Michael is the 5th Generation descendant of Chief Simon Anawangmani. He comes from a long line of Akicitas (Soldiers) both on his father’s side and mother’s side, he also joined the military. He served in the Army for 3 years where he achieved the rank of Spec 5 “Buck Sergeant”. On discharge from the Army he came back to the Sisseton area. He then married “the love of his life,” Priscilla L. Frenier-Simon his wife of 41 years. They went on to start a family. Michael was an incredibly intelligent man, in his latter days he enjoyed researching and writing. He was a co-author of a book “The Dakota Prisoner of War Letters” with his Tahansi Reverend Dr. Clifford Canku. He had accomplished many things in his life time: in his early years he enjoyed playing basketball & Football in high school and softball during the summer. Michael went to Cook Christian training school in Phoenix, AZ to study Christian education. He attended Arizona State University & received his bachelor’s degrees in Political Science & Christian education. When he returned to Sisseton SD he worked in the SWO TERO office. When the Lord called him into the ministry, he then took his family to Dubuque, Ia. Michael received his Master of Divinity from Dubuque Theological Seminary. He was ordained in to the Ministry on July 10, 1983 at Mayasan Presbyterian Church. Where he serviced the Dakota Presbytery for 36 years. Michael served in many position within Dakota Presbytery, the one he admired the most and honored to be in that position was being Stated Clerk. When Michael came back to serve in the Sisseton Wahpeton Oyate community, he became the Long Hollow Councilman Representative in 1985. He also served in many positions for Sisseton Wahpeton Oyate, programs, boards and committees. Michael was very proud of his children, one son and three daughters: Eliphelet J. Simon Sr. of Sisseton SD, daughters: Gretta & Aaron Lavergne of Sisseton SD, Nicolette & Thurston Simon-Owen of Sisseton SD, and Izola Simon of Sisseton SD. Michael is also survived by his siblings; two brothers, Filmore & Christina Simon, and Francis Simon; his sister Barbara Simon-Mail, as well as his many loving nieces, nephews, grandchildren, great grandchildren and other friends. Michael is preceded in death by his parents: Paul & Amelia Simon; brothers: Clayton J. Simon and Ronald D. Simon; sisters: Gevenva R. Simon, Mary L. Simon, Joyce J. Simon, Ethel L. Simon-Max, Jenny F. Simon-Cole; his paternal grandparents: Enoch & Louisa (Tiicahunzewin) Simon, maternal grandparents: Frank & Jennie Harris. Michael served the Lord faithfully for many years and the one thing he wanted was to have his family, friends and community members to accept Jesus Christ as their Lord & Savior. Amen.
Funeral services for Reverend Michael Simon will be held on Wednesday, February 6th, 2019 at 10 AM at The Community Center in Old Agency Village, SD. CRE Filmore Simon, CRE Gerald Heminger Jr., Rev. Clifford Canku and Rev. Al Kitto will officiate. All night wakes will be held Monday, February 4 and Tuesday, February 5 beginning at 7 PM each night. Spring interment will be held at Buffalo Lake Presbyterian Cemetery.
Honorary Casket Bearers are his fellow Dakota Presbyterian Ministers and CRE’s, Keith Lekness, Chris Mato Numpa and Bruce Maylath.
Casket Bearers are Thurston Owen, Stephen Simon, Eliphelet J. Simon Jr., Timothy Laughter, Aaron Lavergne, Ayden Simon, Joshua Laughter and John Ross.
Chilson Funeral Home, Winsted, MN served the family.