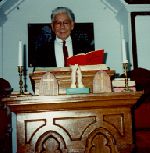 Floyd Louis Heminger, (TaOyateDuta), age 93, of Wilmot, South Dakota passed away quietly at home on Thursday, December 4, 2008 at his residence. Floyd was born on April 3rd, 1915 to Reverend Albert & Ruth Wakeman Heminger. He was the last of ten siblings. His father Albert, was the son of Anthony Heminger, a veteran who served with H Company, 186th Ohio Infantry Volunteers, in the Civil War. He re-enlisted and served with K Company, 33rd Indiana Infantry, and transferred to Ft. Wadsworth which later changed to Ft. Sisseton, Dakota Territory. While there he met TaPahinBdayawin (Fixes Her Hair Fine Woman), a half-sister to Sitting Bull. They were married in August 1873 by Reverend Louis MazaWakinyana at Ft. Abercrombie, Dakota Territory. Floyd’s mother was Ruth Abigail Wakeman Heminger, daughter of Wowinape, son of TaOyateDuta (Chief Little Crow). Wowinape was given the Christian name Thomas Wakeman. Ruth’s mother was Judith MniTanka, a MdeWakantonwan.

Floyd attended the Pipestone Indian Boarding School in Pipestone, Minnesota along with his brothers Wesley, Leroy, Francis and Sisters Rena and Violet. While at school, they were not allowed to speak their Dakotah language. When they were homesick, they sought comfort by playing in the stone quarries, where they would then speak Dakotah to each other. Floyd then attended the Flandreau Indian Vocational High School in Flandreau, South Dakota.

He enlisted in the United States Army on December 4, 1941 at Ft. Snelling, Minnesota. On December 7th, the Japanese bombed Pearl Harbor, Hawaii, and he was sent to the West Coast for desert training. He was assigned to the 3rd Armored Division in anticipation of the African Campaign. With training over, they were sent to England instead, since the African Campaign was over. They then participated in the invasion of Normandy, France. He said he was lucky and never wounded, and one-half of his division got killed at Omaha Beach. “You could hear the big Navy guns shoot over our heads at the cliffs, from the sixteen inch guns on the battleships”. He also said, the Country of France was going to award, all the soldiers who took part in liberating France, with their highest award, “The Legion of Honor”. Napolean Boneparte created that medal, he said. He also said, while overseas, he had received a letter from his mother. “I never got to answer, because we were always moving”. We never got the chance to clean up, long beards and hair. They called us “Sad Sacks”. While attacking east, they were diverted north to Belgium, which became known as the “Battle of the Bulge”. When they reached Bastogne, the Germans started shelling them and they ran to a knocked out bunker. He looked to his right and standing next to him was another SWO tribal member, Percy Kirk. While awaiting discharge at Camp McCoy, Wisconsin, October 20th, 1945, Floyd said, “I was walking down the street, going by a barber shop. I thought, I knew that guy, it was my brother Leroy, getting a haircut”. Leroy was coming back from Southern France, where he had been wounded. “We came home together”, he said. On their return from the war, they rode the train to Milbank, South Dakota, from there, they started walking home with their duffle bags to Big Coulee, when a car came along. The driver asked them, “you guys want a ride”? Where are you from”? Big Coulee they answered. “Whats your name”? Heminger, they replied. He knew some Hemingers, so he gave them a ride to Big Coulee. Meanwhile, their brother Francis, was a U.S. Marine stationed in Washington, D.C., for awhile. From there, Francis went to Hawaii in the Pacific and participated in the Pacific Campaign. As the years have gone by, Floyd finds that he is one of three survivors of World War II from the Lake Traverse Reservation.

The Churches of Ascension, Goodwill, Lake Traverse, Buffalo Lake and Long Hollow on the Lake Traverse Reservation, South Dakota. He also pastored at Devil’s Lake North Dakota and in Fergus Falls, Minnesota. Floyd did have this to say of the Wolf Point, Montana area, “It got this name because they used to shoot wolves at that location. They would pile the jaws up and sell them”. The Elders say, “The longest road you’re going to have to walk in your life is from the head to the heart”. But they also say, “You can’t speak to the people as a leader unless you’ve made the return journey, from the heart, back to the head”.

Reverend Floyd Heminger retired from the Ministry at the lyakaptapi Ascension Church in the Big Coulee District in Peever, South Dakota. Floyd married LaVara Hillers, a Santee Dakotah, at his home by his father The Reverend Albert Heminger. They had one son, Courtney Omar Heminger, and a daughter: Rebecca Heminger-Aadland. His step children include: Keva, Lawrence “Hank”, Joan, Virginia, Edna, Gene and Edwina.

He was preceded in death by his parents: Reverend Albert and Ruth Wakeman Heminger, wife: LaVara on May 8. 1986, his brothers, Christian, Felix, Thomas, Wesley “Scoop”, Leroy & Francis; sisters: Nellie, Rena Heminger-Johnson-Decoteau and Violet Heminger-Greeley-Crocker and by step children: Virginia, Keva, Joan and Edna.

A Wake service will be held on Saturday, December 6th beginning at 7:00 P.M. at The Community Center in Old Agency Village, South Dakota.

The Chilson Funeral Home in Winsted, Minnesota is serving the family. Online condolences may be made to www.chilsonfuneralhome.com.