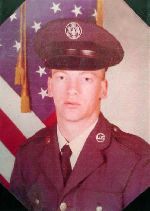 Alvin LeRoy Ziebarth, age 56, of San Antonio, TX and formerly of Sisseton, SD passed away at his home on Saturday, December 8, 2012.

Alvin loved to travel, enjoyed putting models together and collecting old coins. He was in the Army from 1975 to 1976. He then enlisted in the US Air Force from 1976 to 1983 when he was medically discharged. He married Juanita Cleveland in 1984 at the Buffalo Lake Church in Sisseton, SD.

Alvin was preceded in death by his father, Lawrence Ziebarth.

Funeral service for Alvin Ziebarth will be held at 11:00 AM on Monday, December 17, 2012 at Grace Lutheran Church in Sisseton, SD. Pastor William Schruba will officiate.

Visitation will be held on Monday, December 17th one hour prior to services at the church.

Interment will be held at Buffalo Lake Lutheran Church Cemetery in Eden, SD.