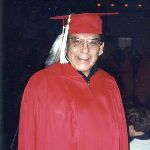 He was born on October 25, 1941 in Sisseton, South Dakota the son of Abraham Lincoln Crawford & Evelyn Gladys Lovejoy.

Reginald received a Bachelor of Arts Degree in 1995 from USD in Vermillion.

He was employed for many years as a Chemical Dependency Counselor at The IHS Indian Hospital in Winnebago, Nebraska. He counseled both adolescents and adults.

Reginald was a sundancer and often attended pow wows.

Preceded in death by his parents and by a sister: Linda Crawford Dolney.

A Memorial Service for Reginald Crawford will be held on Saturday, October 30th at 2:00 P.M. at The Buffalo Lake Presbyterian Church. Filmore Simon will officiate. Interment will follow at the church cemetery.

An all night wake will be held on Friday, October 29th beginning at 7:00 P.M. at The Buffalo Lake District Center.