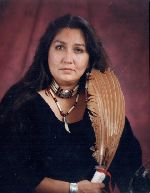 She was born on December 23, 1961 in Sisseton, South Dakota the daughter of Alois J. Wanna and Claudia Kirk.

She enjoyed beading, reading as she was an avid reader, movies, was an artist and native storyteller. She loved her family.

Rebecca was active in A.I.M./Native American Issues and Concerns.

Preceded in death by her father: Philip Van Vlack.

Funeral services for Rebecca Lynn Stoughton will be held on Friday, June 26th, 2015 at 10:00 AM at The Community Center in Old Agency Village, South Dakota.

All-night wake will be held on Thursday, June 25th beginning at 7:00 PM at The Community Center in Old Agency Village, South Dakota.