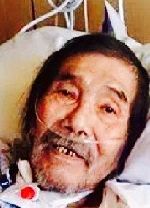 He was born on March 11, 1940 in Red Lake, Minnesota the son of Abraham Smith and Maggie Mae Standing.

Raymond was formerly employed as a fisherman and netter for Red Lake Fisheries.

He liked to visit family and friends and spend time with his grandchildren. He was a proud of his daughters and a proud grandfather of nine grandchildren and two great granddaughters. He enjoyed fishing, balsam, acorn and blueberry picking, playing cards, dominos, 10,000 dice game and net fishing.

Funeral services for Raymond Standing Smith will be held on Saturday, January 11, 2014 at 11:00 A.M. at The Redby Community Center. Spiritual Advisor will be Hank Kingbird.

Drum group will be Kingbird Singers.

All night wakes will be held on Thursday, January 9th and Friday, January 10th beginning at 1:00 P.M.

Interment will be held at Smith Family Cemetery, Redby, MN.