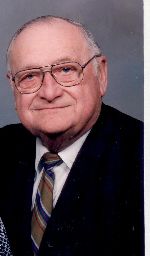 Raymond A. Ruzicka was born May 6, 1919, in Winsted Township, McLeod County, Minnesota to Louis and Josephine (Lamott) Ruzicka. He grew up in Winsted Township and attended country schools. After school he helped on the family farm. Raymond was inducted into the United States Army during World War II.

Raymond was united in marriage to Lillian Helen “Billie” Gritz on October 14, 1942 in Buffalo, Minnesota. The couple owned and operated the Town Club in Silver Lake for a number of years. They then purchased a farm between Silver Lake and Winsted where he raised cattle. Ray and Billie and his brother Clifford and wife, Leona, owned and operated the Blue Note Ballroom in Winsted for many years. After selling the Blue Note Ballroom 40 years ago, Ray kept busy doing a number of things including operating a peanut route and fishing at his lake cabin on Birch Lake near Hackensack. He enjoyed tinkering with woodworking and refinishing furniture. Ray enjoyed wintering in Brownsville, Texas for five years.

Ray has been a resident at St. Mary’s Care Center for the past four and half years.

He is survived by brother-in-law and sister-in-law, Leroy “Hans” and wife Joan Gritz of San Diego, CA.; several nieces and nephews.

Raymond was preceded in death by his parents, Louis and Josephine Ruzicka, wife Lillian “Billie” on October 31, 2004, brother Clifford and his wife Leona, and three nephews, Raymond Schermann, Ralph Ruzicka, and Kenneth Gritz.

The Chilson Funeral Chapel of Winsted is serving the family with the arrangements. Online condolences may be made to www.chilsonfuneralhome.com