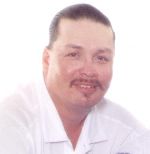 Raymond Jones
AKA
“Jimmy Ray” and “Uncle Ray Ray”
Raymond Morris Jones, “Makaowanca Omani” (One who wanders) age 44, of Flandreau, South Dakota Journeyed to the Spirit World on Tuesday, July 16, 2013 at his residence.
Raymond was born in Sisseton, South Dakota to John Jones and Alvina Hill on September 5, 1968. He spent most of his childhood in Flandreau, SD. where he graduated from The Flandreau Indian School in 1989.
Raymond was a hardworking man who had several jobs as a subcontractor in carpentry and construction.
Raymond was blessed with a voice that had people dancing and enjoying themselves when he performed, many called him “Jimmy Ray” He and his buddies played for a lot of occasions, singing a variety of music that would rock the house!
Raymond loved children and believed in their sacredness. He was kind and gentle to those children who would call him “Uncle Ray Ray”. Raymond would take the kids fishing and they all enjoyed themselves and his company. The believe it or not catches are your fish stories to share!
Raymond has many friends and all have respect and love for the man. He had a hardy laugh that would make you laugh because he was so genuine when he expressed laughter and joy.
Raymond is survived by his wife: Marcie Rae; two daughters: Whitney Jones and Cynthia Demarrias; two step sons: Christopher Barse and Tracii Barse; seven grandchildren; his mother: Alvina Hayes; his grandmother: Louise Jones; brothers: Howard Redday III and Brian Blue Cloud; sisters: Bernie Kohl, Rhonda Redday, Rochelle “Missy” Kohl and Monica Jones; many other relatives and friends.

Preceded in death by his father: John Jones and Grandfather Kingsmill Jones
Raymond will be missed but never forgotten by all that knew and loved him. He died of cancer at the young age of 44 years old. Raymond left behind family and friends who will miss him but again he will never be forgotten.

Funeral services for Raymond M. Jones will be held on Friday, July 19th, 2013 at 11:00 A.M. at The Community Center in Old Agency Village, South Dakota .

The Chilson Funeral Home in Winsted , Minnesota is serving the family. Online condolences may be made to www.chilsonfuneralhome.com