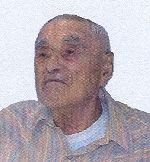 Ray was born in Sisseton, South Dakota on October 23, 1910 to Emma Marks and David Eastman. He grew up at Buffalo Lake and was raised by his mama Emma and by Henry Red Star. He celebrated his 99 to 100th birthday only days before his death. He went to school in Wahpeton and in Pierre.

He had one son with Rebecca Flute, Magnus Rainville. He then married Angeline Two Stars and they had four sons. First were the twins, DuWayne “Big Boy” and Wayne “Pee Wee”, then Donald and then Clayton. Angeline died from tuberculosis, when their children were yet boys. He then married Virginia Robertson Woods and they spent over 50 years together until her death in 2007. They raised her granddaughter Becky.

Raymond was proud of the fact that he had been attending the Buffalo Lake Sundance for twenty-nine years, since the very first one. He loved listening to Sundance songs.

All night wakes will begin today, Monday, November 2nd at 7:00 P.M. at The Buffalo Lake Community Center and continues on Tuesday, November 3rd.