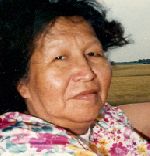 Ramona V. Keeble, age 62 of Sisseton, journeyed to the Spirit World on Sunday, December 23, 2007 at the Tekakwitha Living Center in Sisseton after a long battle with cancer.

Ramona Veronica Kitto was born on October 5, 1945 in Bryant Township to Charles E. and Frances Irene (nee Wilson) Kitto. She attended Browns Valley High School in Browns Valley, Minnesota. In the early 1960’s, Ramona married A. George Keeble. She worked for the SWO Tribal Offices in Sisseton before working at the Sisseton-Wahpeton Community College for several years. She returned to working for the Tribal Offices where she was a payroll clerk in the accounting department. She worked there for many years until her health failed. Ramona enjoyed quilting, playing bingo and helping others. She was a member of the St. John the Baptist Episcopal Church in Browns Valley, MN.