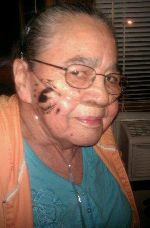 She was born on October 19, 1929 in Red Lake, Minnesota the daughter of Charles Roberts and Jenny Kelly.

Phyllis was formerly employed as an assembly line worker at Honey Well.

She enjoyed cooking, sewing, bingo and going to casinos. Most of all, she enjoyed her grandchildren and being with her family.

Funeral services for Phyllis Jourdain will be held on Thursday, September 6th, 2012 at 10:00 A.M. at The Red Lake Community Center in Red Lake, Minnesota.