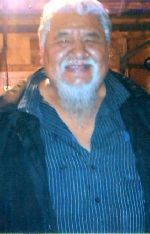 He was born on June 18, 1946 in Red Lake, Minnesota the son of Frank Johns and Philomene Lajeunesse.

He graduated from Red Lake High School and he attended Vocational School where he graduated for carpentry.

He moved to Oakland, California for two years where he did factory work. Phillip then moved to Chicago and did factory work their and was also a part-time cab driver
He moved back to Red Lake where he built his own home.
Phillip worked for the Red Lake BIA for approximately thirty years.

He liked to hunt, fish, go to the Casino, and spend time with his grandchildren, he also had his own logging business for many years, he did a lot of contract work building homes for others. He also bought his own truck and moved trailer houses around the reservation for fellow Red Lake members.

Mass of Christian Burial for Phillip B. Johns will be held on Wednesday, December 4th at 1:00 P.M. at St. Mary’s Catholic Church in Red Lake. Father Jerry Rogers will be the Celebrant.

All night wakes will be held on Monday, December 2nd and Tuesday, December 3rd beginning at 4:00 p.m. at The Red Lake Community Center.