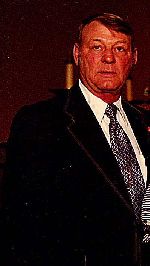 He was born on June 8, 1931 in Victor Township, Wright County the son of Anton “Anthony” J. & Mary Horstmann Fiecke.

He was born, raised and lived his entire life on the family’s homestead in Victor Township, Wright County.

He honorably served his Country in The United States Army during the Korean War.

On May 28, 1955, Philip A. Fiecke and Rose Ann Hemerick were joined in holy marriage at St. Adalbert Catholic Church in Silver Lake. God blessed their marriage with five children.
Philip engaged in dairy, hog and poultry farming for many years. He later drove school bus for The Howard Lake-Waverly School District. Through the years, Philip was an auto mechanic and drove grain truck with his brother Norbert.

He was a life, long member of Holy Trinity Catholic Church in Winsted serving as a church usher.

Preceded in death by his loving wife: Rose Ann Fiecke on September 7, 1999, an infant son: Anthony Leo Fiecke in 1956, his parents, an infant brother, an infant sister, brothers: Norbert and Richard “Dick” Fiecke and by sisters: Elizabeth “Betty” Kuras and Helen Zanoth.

A Mass of Christian Burial for Philip Fiecke will be held on Wednesday, March 14th at 10:30 A.M. at Holy Trinity Catholic Church in Winsted. Father Tony Hesse will be the Celebrant. Reader will be Mary Fiecke. Gift Bearers will be Kaitlyn Fiecke & Harley Brott.

A visitation will be held on Tuesday, March 13th from 4-8 P.M. at The Chilson Funeral Home in Winsted. An American Legion Ritual will be held at 7:00 P.M., K.C. Rosary at 7:30 P.M. followed by Parish Prayers.