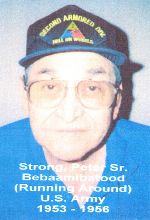 Peter Strong Sr. Bebaamibatood (Running Around) of the Bear Clan, age 80, of Redby, Minnesota Journeyed to the Spirit World on Wednesday, April 16, 2014 at his residence.

He was born on September 8, 1933 in Red Lake, Minnesota the son of Joseph W. Strong and Isabel Graves.

Peter was raised in Redby and Red Lake. He graduated from Red Lake High School and was proud of being a Red Lake Warrior

He honorably served his Country in The United States Army from 1953 to 1956. He was stationed in Germany as a hand radio operater.

Peter worked at The Redby Saw Mill, was the Community Action Program Director, was a member of the Red Lake School Board for twenty years, and Red Lake Bingo. While he was the CAP director, Pete was an intricate part in the development of programs and procuring funds and grants for many buildings which are still standing today. Pete was formerly employed as a Property Supply Tech Manager for The Red Lake Tribe and was a DFL Delegate for many years.

Pete was a loving father, grandfather (Gramps) and great-grandfather. He was a lifelong member of St. Antipapas Episcopal Church in Redby, MN. Pete enjoyed watching the tv show Frazier, politics and news from “The Hill”. The tv got yelled at a lot during these times. He loved cheering for the Redlake Warriors during the 1990’s and 2000’s. Anywhere he sat during a game, you knew where he was. He was loud and proud! He was an avid horseracing fan and made a substantial living during his many years at the track. He loved the math involved with figuring out his exactas and trifectas.

Pete was most happy when he was behind a drum and singing. He loved pow wows, singing and dancing with his father and brothers in the early years. He loved to travel to the pow wows and meet new friends from other tribes. He made lifelong friends along the way. He never said he was the best singer but he was one of the loudest and had a way of remembering songs that he had only heard once or twice. He was one of the original Redlake Singers and Battle Lake Singers. The drum group ‘Old Timers’ won first place in Newton, ND in 2003. He and the members of his drum groups placed many times over the years.

Pete had a quick and uncanny sense of humor. He had a strong ethical background and was proud of doing things the right way. He was humble and he loved education and learning new things his entire life. In his younger years he was an avid hunter and fisherman. He had lots of stories to tell and had many friends, young and old. He will truly be missed.

Inurnment will follow at The Redby Episcopal Church Cemetery.

All-night wakes will be held on Saturday and Sunday, April 26th and 27th at the Redby Community Center beginning at 3:00 PM.