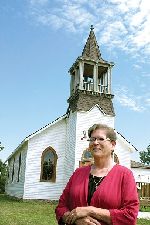 She was born on July 13, 1957 in Flandreau, South Dakota the daughter of John & Fannie (Cavendar) Armstrong.

She graduated from Flandreau high school in 1975. Years later Paula attended seminary school in Dubuque, Iowa. After that she was Lay Pastor/ Minister at the First Presbyterian Church up to the present time.

She was employed at the Flandreau Commodity Office for 10+ years. After a few years of not working she worked again at the Tribal Clinic in the CHS Department for a number of years. She later retired to focus on her seminary and enjoying her grandchildren.

Paula was most proud of becoming an ordained minister. Her personal achievements were her children and grandchildren. Being involved with everything to do with her family, spending time together with them no matter what it was.

Unusual attributes: No matter what the situations was, Paula always found the humor in it and was a very strong person being able to help people in any situation good or bad.

Paula was a Dakto Hymn Singer, active at The First Presbyterian Church in Flandreau, was a Denver, Broncos fan, enjoyed stock car racing, youth baseball. She liked to dance, enjoyed cooking and making pies was her favorite. Paula made beaded pens with Bible verses.

Preceeded in death by by her father John Armstrong and by four aunts and an uncle.

Funeral Services for Paula Armstrong will be held on Thursday, April 6th, 2017 at 11:00 A.M. at Eastman Hall in Flandreau, South Dakota.
Reverend Bill Canku will officiate.

Special music will be provided by The Dakota Hymnal Singers.

An all night wake will be held on Wednesday, April 5th beginning at 7:00 P.M. at The Eastman Hall in Flandreau, South Dakota.

The Chilson Funeral Home in Winsted, Minnesota is serving the family. Online condolences may be made to www.chilsonfuneralhome.