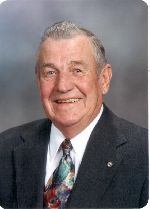 He was born on March 26, 1924 in Hollywood Township, Carver County the son of Clemens & Clara (Hoffmann) Neumann.

Paul and Elaine engaged in dairy farming for many years in Hollywood Township, Carver County.
He enjoyed spending time with his children and grandchildren, playing cards, fishing, going to the cabin up north, singing and harmonizing, and listening to old time music–especially played by his good friend Vern Farber.

Paul was a faithful member of Holy Trinity Catholic Church in Winsted. He also belonged to The Catholic Order of Foresters.

Preceded in death by his wife Elaine Neumann on November 17, 2004, a son Larry “Stosh” Neumann in 1996, his parents Clemens & Clara Neumann and by three sisters.

A Mass of Christian Burial for Paul Neumann will be held on Monday, April 11th at 11:00 A.M. at Holy Trinity Catholic Church in Winsted. Father Paul Schumacher will be the Celebrant. Alice Nowak will be the organist for the Mass.

In lieu of flowers, memorials are suggested for The Holy Trinity New Entrance Building Fund.