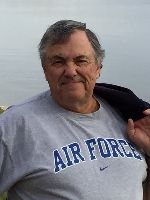 Patrick Michael Corr, age 69, of Annandale and formerly of Winsted passed away on Friday, May 6, 2016 at his residence.

Patrick honorably served his Country in The United States Air Force. Disabled Veterans were very close to his heart.

On May 18, 1979, Patrick Corr and Margaret L. Johnson were joined in holy marriage at Holy Trinity Catholic Church in Winsted. God blessed their marriage with two children.

Patrick was formerly employed in Environmental Services for The Metropolitan Council.

He enjoyed his time on Lake Sylvia. Patrick was a jack of all trades, his family was very important to him! He also enjoyed remote control airplanes and rockets and he was a classic car buff.

Preceded in death by his parents James and Clara Corr.

A Memorial Mass of Christian Burial for Patrick Corr will be held on Thursday, May 12, 2016 at 11:00 A.M. at Holy Trinity Catholic Church in Winsted. Father Paul Schumacher will be the Celebrant. Interment with military rites Holy Trinity Cemetery.

A visitation will be held on Wednesday, May 11th from 4-7 P.M. at The Chilson Funeral Home in Winsted. A Prayer service will be held at 6:30 P.M.

In lieu of flowers, please donate to the DAV who do so much for our wounded Vets and have dedicated the organization to give that to Veterans, instead of high administration cost.