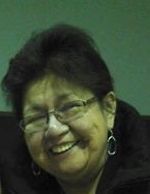 She was born on August 22, 1951 in Red Lake, Minnesota the daughter of Paul Prentice Jr. and Marian Needham.

Patricia was employed as a grant writer for The Red Lake Tribe. In addition to her job as Grant Writer, Trisha was known for her dedication to fighting addictions of all forms. She did extensive, intensive work in the field of counseling, speaking and doing presentations all around Indian Country. She worked for years in the Healing Pathways effort, exploring traditional ways of working against the modern scourges of alcohol and drug abuse by speaking with and listening to elders.

Her easygoing style, her sense of humor and love of laughter endeared her to all she met. She was a woman who got things done. Although she had no biological grandchildren she had many young people who call her “Gramma” and even more who consider her “Auntie”. Trisha was an old style jingle dress dancer who took great pride in her nephews who sing with various drum groups. And all the dancers in the family. She was proud and fiercely protective of all her family. She represented the Red Lake Band well in her term as Princess and continued to faithfully serve on the Royalty Committee. She will be missed by several generations of family and friends!

Survived by significant other: Don Silverstar Sr.; family was her absolute priority, especially the well-being of her special son: Donnie Silverstar Jr. “Donnie Frog”; she was inspired by the bond between him and his sister Alaina Prentice ( significant other: Phil Lussier); sisters: Della Prentice and Barbara Westbrook; other relatives and friends.

The wake will begin on Saturday, November 9th at 2:00 PM at the Redby Community Center and continue until the time of service on Monday.