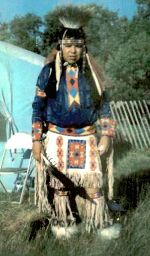 Orsen Kerwin Bernard “Iḣawaŋyakapi” (When You See Him He’s Always Smiling), age 83, of Grenville, SD journeyed to the Spirit World on Saturday, July 28, 2018.

He was born on April 7, 1935 in Sisseton, SD the son of Aaron and Lavina (Blackstone) Bernard.

He graduated from Sisseton High School and joined the Army from 1955 to 1959. After discharge from the Army, he worked as an orderly at the State Hospital in Salem, Oregon.

He worked at Dakota Pride and the VA in Fargo, ND and retired from the CHR Program. He also worked with Dakota Language Institute with Tammy DeCoteau. Orsen was an avid TZ fan. He wouldn’t miss a game if he could help it and when he couldn’t make a game he would watch it on his laptop at home. He also enjoyed watching boxing, baseball and football with his son-in-law, Tony, at home. His favorite team was the Baltimore Ravens and his favorite movies were The Blind Side and Secretariat.

Preceded in death by his parents; six brothers; six sisters; and a son, Lester Bernard.

Funeral service for Orsen Bernard will be held on Thursday, August 2, 2018 at 2:00 PM at the SWO Community Center in Old Agency Village, SD. Lunch will be served at noon, prior to the service. Mike LaFontaine, Coke LaFontaine, Clyde Kampeska and Milton Owen will officiate. Drum groups will be Old Agency and Big Stone.