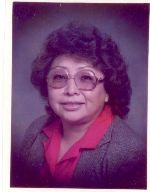 Olivia Jean Palacio (Hill), 67, of Sisseton, South Dakota died on April 21, 2010 in her son’s arms at the Kateri Tekawitha Living Center. Olivia was born to Martha Barker Hill and Samual Hill. She attended Flandreau Indian School, then went to Minneapolis, MN where she met and married Julian Bascillo Palacio. She worked at Augustana Nursing Home for many years and various other jobs. Olivia moved back to Sisseton after her husband passed in August 1999. Olivia attended Cook College in Arizona for two years where she studied ministry. She returned in 2001 where she attended Sisseton Wahpeton College to finish her ministry studies. She was a devout Christian, loved to read her bible and sing Christian songs.

Kay Bursheim was the pianist. Special music was provided by Butch Felix.