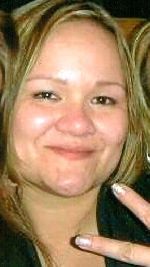 She was born on August 25, 1979 in Minneapolis the daughter of Dave and Linda Dickenson (Kevin Strong and Diane Mikalojczyk biological parents).

Nichole liked to spend time with her family. She would like to help out as a caregiver and also liked taking care of children. She was a jokester and liked to laugh. Nichole loved her nieces and nephews. She enjoyed music, going to concerts, attending family events and going to the State Fair. Nichole loved being a grandmother!

Preceded in death by parents Dave and Linda Dickenson, biological mother Diane Mikalojczyk, a brother Dana Dickenson and by a nephew Aaron Dickenson.

Funeral Services for Nichole Mikalojczyk will be held on Saturday, September 16th, 2017 at 10:00 A.M. at Parkway United Church of Christ, 3120 Washburn Avenue N. in Minneapolis.
Darwin Strong will officiate.

A wake will be held on Friday, September 15th beginning at 7:30 P.M. at Parkway United Church of Christ.