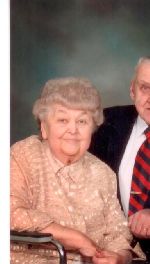 She was born on August 31, 1927, in Sebeka, MN, the daughter of Walter and Sylvia Isackson Sporre.

Thaline was baptized in 1927. She was also instructed in the Lutheran Catechism and confirmed in the Christian faith on May 21, 1944, at First English Lutheran Church in Faribault, MN.

She graduated from Faribault High School in May, 1945.

On August 4, 1947, Thaline B. Sporre and Russel R. Paschke were joined in holy marriage in Faribault. Gob blessed their marriage with eight children.

She was a faithful member of St. John’s Evangelical Lutheran Church in Winsted. She formerly served her church as a Sunday School teacher and belonged to the Lutheran Women’s Mission League.

Thaline enjoyed gardening, flowers, birds, crafting, and was a very artistic person. She had various collections that she enjoyed adding to by finding a special treasure at many rummage sales and had a story for every piece! Through the years, she also was a Cub and Girl Scout mother. She formerly was employed at St. Mary’s Nursing Home, the Red Owl Store, and at the Edco Sewing Factory.

Preceded in death by a grandson: Billy Wemhoff, her parents, father-in-law and mother-in-law: Alex and Ida Paschke; and by brothers-in-law and sisters-in-law.