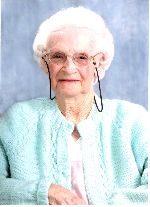 She was born on January 15, 1920 in Glencoe the daughter of Louis & Elizabeth (Artmann) Kegler.

Monica & Norbert engaged in dairy farming for many years. She was also employed at The Coffee Shop, Jim’s Bakery, Roufs’ Meat Market and at The Blue Note Ballroom in Winsted.

She enjoyed bingo, fishing, playing cards, big gardens and family was important to her.

She was a faithful member of Holy Trinity Catholic Church in Winsted and belonged to its Catholic Aid and Holy Family Council #204. Monica also cooked many funeral lunches through the years.

A Concelebrated Mass of Christian Burial for Monica M. Albers will be held on Tuesday, February 9th at 3:00 P.M. at Holy Trinity Catholic Church in Winsted. Concelebrants will be Father Tony Stubeda and Father Paul Schumacher.