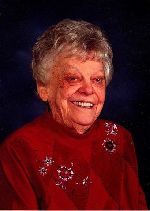 She was born on September 6, 1920 in Winsted, the daughter of Peter and Margaret Keefe Corr.

She was a faithful member of Holy Trinity Catholich Church in Winsted.

Preceded in death by her husband Leo E. Jacques on August 26, 2001, sons: Patrick Jacques and Robert Jacques, her parents, and sons-in-law: Leonard Pawelk and Dave Torblaa.

A Mass of Christian Burial for Monica Jacques will be held on Saturday, January 21 at 11:00 A.M. at Holy Trinity Catholic Church in Winsted. Father Tony Hesse will be the Celebrant.

The Chilson Funeral Home assisted the family with arrangements.