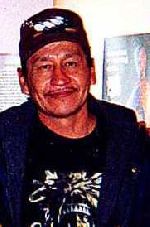 He was born on June 18, 1953 in Sisseton, South Dakota the son of Zachariah Hill and Josephine Starlight. The youngest of nine children.

Michael attended BC Day School and received his GED.

He married Nancy Little Hawk on October 21st, 1989. To this union six children were born, five daughters and a son. Another son Weston Hill
was born.

Mike was a fun loving guy, he made everyone smile and laugh. He had many friends and was called “Uncle” by so many young people.

Michael like to sing and play guitar. He sang duets with his mother in Church.

In his younger years, he played softball as a pitcher and played Basketball. In 1980 he was a grass dancer and danced with his five
daughter’s throughout Indian Country.

He lived a good portion of his life in The Fargo-Moorhead area. He moved back to Sisseton, South Dakota in the early nineties.

Michael loved his children, grandchildren, brothers, sisters, nephews and nieces. Mike was special to all. He will be greatly missed and
remembered always.

Funeral Services for Murray Michael Hill will be held on Monday, October 8th at 2:00 P.M. at The Big Coulee Ascension Church.

Drum group will be “Cook Brothers” and “Big Coulee Choir”.

All night wakes will be held on Friday, October 5th, Saturday, October 6th and Sunday, October 7th beginning at 7:00 P.M. at The Big Coulee
District Center.