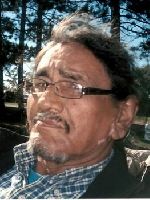 Mike Sr. was a member of the Red Lake Band of Chippewa Indians in Red Lake, MN. He enjoyed working many different jobs. A hard working mechanic, college and high school substitute teacher, a counselor at the Minneapolis American Indian Center and worked as a laborer in the lumber industry. Michael loved going to the casino, his favorite was the Keno Slot Machines and playing Blackjack. He also loved singing on the Pow Wow trail with the Red Lake Drum Group. His hobbies were keeping up with the newspapers, going to check the mail and attending high school basketball games. He enjoyed a good cigarette and caring for the family cat, Libby.

He was preceded in death by his parents: Isabelle and Harry Smith Sr.; daughters: Shannon Anderson and Lisa Smith; a son: Michael Smith Jr.; brothers; John Sr. and Phillip Smith; grandchildren: Carron and Braylie Ortley and many other relatives and friends.

An all-night visitation will be held on Tuesday, August 27rd, 2019 beginning at 6:00 PM at the Redby Community Center in Redby, Minnesota.

A Memorial Service for Michael G. Smith Sr. will be held on Wednesday, August 28th, 2019 at 1:00 PM at the Redby Community Center in Redby, Minnesota.

Serving the family with funeral arrangements are The Chilson Funeral Home in Winsted, Minnesota.
Online Condolences can be directed to www.thechilsonfuneralhome.com