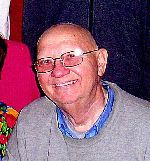 He was born on July 26, 1935 in rural Winsted, the son of Adalbert & Isabelle Fasching Brose.

Michael was baptized at Holy Trinity Catholic Church in Winsted in 1935.

He played in the Community band for twelve years.

Mike farmed with his father until he entered The United States Army and served in the Infantry Division.

Mike purchased the family farm from his parents in 1970 and also worked at Millerbernd Manufacturing Company in Winsted until he retired.

He was always helping others and put his family before himself. Mike was a handyman with carpentry and mechanically inclined.

He enjoyed his children, grandchildren and country music. He loved nature and traveling.

Mike was a life-long faithful member of Holy Trinity Catholic Church in Winsted and belonged to The Knights of Columbus Council # 8253 and toThe Catholic Order of Foresters Court # 1054.

Preceded in death by his wife: Dorothy Brose on December 28, 2008, his parents, a brother: Stephan Brose and by a sister: Elmerine Nowak.

A Mass of Christian Burial for Michael Brose will be held on Thursday, September 13th at 11:00 a.m. at Holy Trinity Catholic Church in Winsted. Father Tony Stubeda will be the Celebrant.

A visitation will be held on Wednesday, September 12th at The Chilson Funeral Home in Winsted from 4-8 P.M.

A Prayer service will be held at 4:30 P.M. and a combined Knights of Columbus and Catholic Order of Foresters rosary will be recited at 7:00 P.M. Further visitation will be held on Thursday, September 13th at the funeral home from 9:30 A.M.-10:30 A.M.