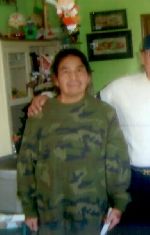 Michael L. Brant, age 50, of Sisseton, South Dakota journeyed to the Spirit World on Friday, February 19, 2010. He and his nephew Jarred Brant died tragically in a house fire.

He was born on November 29, 1959 in Sisseton, the son of Norman Issac Brant and Rose Blossom Johnson Brant. Uncle Mike was the seventh of ten children.

He lived off the land and loved it! Mike was especially fond of fishing and went every day.

Mike was an easy going person and always had a smile on his face.

Mike lived in Red Iron all of his life. He was baptized at Buffalo Lake Presbyterian Church.

He also helped as a firekeeper at The Buffalo Lake Sundance for many years.

His love for popcorn earned him the name of “Mike pops the corn”.

Mike liked to read hunting and fishing magazines. “Soldier of Fortune” was his favorite.

Preceded in death by his parents, two sisters: Inez and Rita Rae and by a brother: Gary Brant.

Combined funeral services for Michael Brant and Jarred Brant will be held on Wednesday, February 24th at 10:00 A.M. at The Buffalo Lake District Center. Filmore Simon, CLP will officiate.

All night wake will be held on Tuesday, February 23rd beginning at 7:00 P.M. at The Buffalo Lake District Center.

Special music will be provided by Drum Groups: “Red Storm”, “Eyabay” and “Midnte Express”. Butch Felix will also be a vocalist.