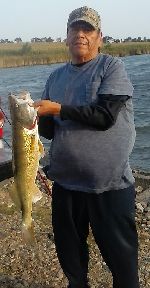 Michael Anthony Long, age 57,of Flandreau, South Dakota journeyed to the spirit world on May 31, 2018 at the U of M Hospital in Minneapolis, Minnesota. He was born on October 8, 1960 in Pine Ridge, South Dakota to Arthur Long and Evelyn Grass. He was a very loving father and grandfather and a good friend to many. He enjoyed spending time with his children and grandchildren. Michael was a born again Christian. He was an outdoorsman spending many hours hunting and fishing. A hunting guide for the Rosebud Sioux Tribe, Michael would take his son Justin along, teaching him many things about hunting and fishing.

Michael is preceded in death by his father: Arthur in 1989 and his mother: Evelyn in 2012; brothers: Arthur Long and Pat King.