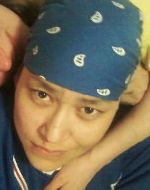 She was born on January 23rd, 1975 to Robert and Phoebe (Quinn) Thompson in Sioux City, Iowa.

Missy received her education at The Tiospa Zina Tribal School and Aberdeen High School and at Weber-Basin Job Corp where she studied welding.

Missy held many jobs in Fargo, Moorhead area as a non-traditional construction worker. She was skilled in concrete, dry-wall and marble ceramic tile setting and roofing.

Missy made her home in The Fargo-Moorhead area for fifteen years where she made many friends.

Missy mentored the youth in the Fargo-Moorhead area through the Big Brother/Big Sister club. She enjoyed taking them to the movies, roller skating and buying them gifts.

Missy loved a wide variety of music and she loved attending concerts and dancing. She was fun-loving, humorous, and loyal. She loved her family and friends. She enjoyed watching football and was an avid Green Bay Packers fan.

Missy will be missed by all who knew her and loved her.

Funeral services for Melissa Ann Thompson will be held on Saturday, December 29th at 2:00 P.M. at The Big Coulee District Center in rural Peever.

An all night wake will be held on Friday, December 28th at The Big Coulee District Center at 7:00 P.M. Pastors Enright Big Horn and Milton “Nippy” Owen will officiate. Eulogy by Katie Hill.

Honorary Casket Bearers will be All of Missy’s Relatives and friends.