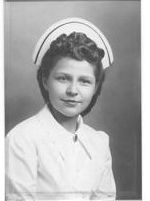 She was born in Hawarden, Iowa on August 20, 1924 the daughter of William and Mary (Thinnes) Muth.

Madge worked as a nurse anesthetist and registered nurse for more than fifty years. As a nurse, she worked in Sioux City, Iowa, the Veterans Administration’s Medical Center in Minneapolis, Mercy Hospital in Moose Lake, St. Mary’s Hospital in Winsted, Watertown Hospital and at the Howard Lake Care Center.

On July 18, 1948 Mary Madeline Muth was joined in holy marriage to Herbert Warren Carlson at the Chapel of the Veterans Administration’s Medical Center in Minneapolis. God blessed their marriage with four children: Gary, Paulette, Bradley, and Joseph.

In the fall of 1949, Herb and Madge moved to Winsted. The Carlson’s owned and operated Herb’s Bakery in Winsted for many years. She often decorated the cakes the bakery made for special occasions.

In 1964 they located to Moose Lake, MN where they owned and operated Herb’s Bakery. Madge continued anesthesia work at Mercy Hospital in Moose Lake.

The Carlson’s moved their family onto a farm in Stockholm Township, Wright County, in 1970. Mr. Herbert Carlson preceded his wife in death in 1982 and Madeline moved into the city of Winsted 10 years later.

Madge was a member of Holy Trinity Catholic Church in Winsted. She also belonged to American Legion Post #407 Auxiliary and to the V.F.W. Post #9232 Auxiliary.

Madge was known as the life of the party, with a special talent for singing and entertaining. She was a child of the depression and became very thrifty. She took to sewing everything from stage outfits to blazers for the children’s Prom. Madge was a selfless woman who wasn’t afraid to her get hands dirty. She saved and she gave.