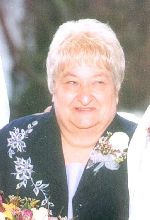 She was born on September 19, 1937 in Heron Lake, Minnesota the daughter of John & Cleo Aeiling Penticoff.

On October 20, 1956, Mary Ellen Penticoff and Robert Arneson were joined in marriage in Stewart. God blessed their marriage with three children. They lived in Litchfield and also resided in Hutchinson.

She was formerly employed as a assembler for Tonka Toys.

She was also a volunteer at The V.F.W. and The Legion.

Funeral services for Mary Ellen Arneson will be held on Thursday, May 23, 2013 at 12 Noon at The Chapel of St. Mary’s Care Center in Winsted. Father Eugene Brown will officiate.

A visitation will be held on Thursday, May 23rd from 11-12 Noon at The Chapel of St. Mary’s Care Center.

Interment will be held on Friday, May 24th at 10:30 A.M. at Fort Snelling National Cemetery assembly # 6.