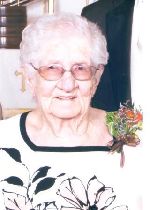 She was born on May 26, 1918 in Grand Marais, Minnesota the daughter of Frances & Mary Beaudette Babineau.

Mary and Russell engaged in farming for many years in Middleville Township, Wright County. Mary was also formerly employed as a press operator at Tonka Toys in Mound for twenty one and a half years.

She was a faithful member of Holy Trinity Catholic Church in Winsted and belonged to St. Anne’s Society.

Preceded in death by her husband: Russell J. Cardinal on November 29, 2000, a son: Kenneth E. Cardinal, her parents, a brother: Reuben Babineau and by a sister: Olive Dalbec.

A Mass of Christian Burial for Mary Ann Cardinal will be held on Wednesday, January 2nd, 2013 at 11:00 A.M. at Holy Trinity Catholic Church in Winsted. Father Paul Schumacher will be the Celebrant.

The Chilson Funeral Home in Winsted is serving the family. Online condolences may be made