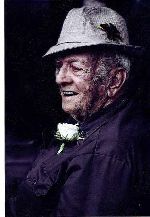 Marvin was born on October 1, 1924 in Hollywood Township, Carver County, MN the son of Joseph and Amelia (Kallenbach) Neumann.

Marvin and Marietta Sherman were married on June 2, 1948 at Holy Trinity Catholic Church in Winsted, MN. Their marriage of 64 years was blessed with 10 children.

He had been a member of the Silver Lake Knights of Columbus and Catholic Order of Foresters. He was a leader of the Winsted Jolly Juniors 4-H Club. He enjoyed playing cards and putting jigsaw puzzles together. Marvin loved being surrounded by his kids, grandkids and great grandkids. He also enjoyed listening to polka music, cutting the lawn, traveling, feeding and watching the birds and was an avid fisherman.

He is preceded in death by his parents, his siblings Joseph Neumann., Elaine Neumann, Shirley Quast and Wilbert Neumann and son-in-law Howard Dworshak.

A Mass of Christian Burial will be held on Saturday, October 20, 2012 at Holy Trinity Catholic Church at 2:00 PM. Father Paul Schumacher will be the celebrant.

The Chilson Funeral Home of Winsted assisted the family with arrangements.