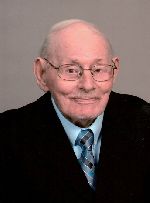 On June 6, 1944, Marvin Scheuble and Ellen Babatz were joined in holy marriage at St. Mary’s Catholic Church in Waverly. God blessed their marriage with eleven children.

Marvin owned and operated M. Scheuble Trucking for many years. He also drove school bus for District #877 for thirty-two years.

Marvin was a faithful member of St. Mary’s Catholic Church in Waverly and served as a longtime usher.

He was a former thirty year member of The Montrose Fire Department and formerly served as a Wright County Sheriff Reserve.

A Mass of Christian Burial for Marvin Scheuble will be held on Tuesday, October 1, 2019 at 10:30 A.M. at The Church of St. Mary in Waverly. Father Kenneth O’Hotto will be the celebrant. Interment will follow at St. Mary’s Cemetery.