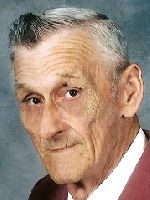 Marvin LeRoy Brown was born on December 5, 1930 to Jack Earl Brown and Sarah Mildred (Howard) Brown, on his grandparent’s farm near Hampton, Iowa.

Marvin grew up in Hampton, Iowa and attended school through the eighth grade. Though not formally educated he loved to read and continued learning through his years.

He joined the Army and served in The Korean War as a medic. Marvin was awarded a Purple Heart for saving several fellow troops after receiving a shrapnel wound to his legs.

Preceded in death by his parents, a sister and by a son-in-law: Gary Major.

After his marriage to Karen and some traveling with his family, they settled in Winsted where they lived for the past thirty years. He was associated with the Winsted Airport where his love of flying drew him to make many friends.

His love of driving gave him the opportunity to drive for K-Way trucking over a twenty year span. Driving truck gave him the pleasure of being able to travel the open roads.

He is now at Peace.

A Memorial service for Marvin Brown will be held on Friday, November 27th at 10:00 A.M. at The Chilson Funeral Home in Winsted.