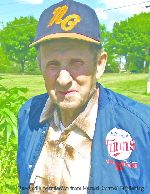 He was born on August 27, 1938 in Winsted, MN the son of Frank and Margaret (Kieser) Gueningsman.

On December 13, 1959 he married Joan Baker and their marriage was blessed with two sons. Marvin enjoyed farming and worked as a hired hand at several of the local farms. He also enjoyed working in his garden and fishing.

He is preceded in death by his wife, his parents, son David, siblings Luella, Bill, Leonard, Verdella Sterner and Leona Helmbrecht.

Memorial service for Marvin Gueningsman will be held on Tuesday, September 2, 2014 at 7:30 P.M. at Chilson Funeral Home, Winsted.