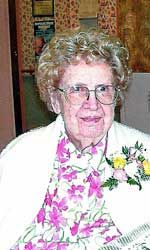 Martha Mathilda Fitzpatrick, age 100, of Waverly passed away Friday afternoon, February 3, 2012, at the Good Samaritan Home in Howard Lake.
She was born May 12, 1911, to Andrew and Julia (Quast) Heimerl in Winsted. Martha attended the Most Holy Trinity School in Winsted, graduating on June 6, 1930.
On October 9, 1935, Jack and Martha joined in the Holy Bonds of Matrimony in the Church of The Holy Trinity of Winsted, Minnesota, by Pastor William M. Way. Since her marriage Martha was a faith filled member of Saint Mary’s Catholic Church in Waverly. The couple farmed the Fitzpatrick homestead south of Waverly until 1966. They were blessed with two sons, Jerry and Tom. Martha and Jack enjoyed 35 years of marriage until his death in 1971.
Her God given gift of homemaker was a blessing to her family. A delicious cook, a yummy baker, a fine mender, a great gardener, a right hand to her farm husband, and a doting mother filled her day with pleasure and contentment.
Martha continued to live on the farm, or as she often referred to it, “God’s country”, until 1976, when she moved to the Waverly Community Homes. It was there that she gained new friendships that filled her days with contentment. A walk to Mass, onto Pete’s for a few groceries, and then a stop at the Café for a cup of coffee were simple pleasures Martha enjoyed with her dear friends from the community homes.
In 2005 a move to the Good Samaritan Home in Howard Lake found her a whole new experience in gaining friendships of young and old, residents and staff, as well as resident families. There she continued to amaze us with her gift of longevity, with very few health issues. She was a little offended to think they thought she should have help with her daily care. “Oh baloney” became a familiar response from Martha to the caretakers when they offered assistance.
Unconditional love was a beautiful gift that Martha extended to her family. Her grandchildren each share an endearing love that flowed from her for them. Martha delighted in her grandchildren and they in turn adored her. Their eyes alit in the presence of each other. Her tender touch reached out as she met her new-born great grandchild last week with a quiet precious moment.
The gentle beauty, inside and out, of Martha has filled our lives. She will be missed by her son Jerry and Sue Fitzpatrick and their family, Ali Fitzpatrick and Jill Pogemiller (Dan Erickson); and her son Tom and Jan Fitzpatrick and their family Josh Fitzpatrick, Jacob and Alexa Fitzpatrick, and Katie and Paul Schulz and their new born daughter June Schulz.
She is also survived by her brother, Ed Heimerl of Chanhassen, Sister-in-Law, Sharon Heimerl of Chaska, and nieces and nephews. Martha was preceded in death by her parents; husband Jack; brother Gerald Heimerl; and brothers and sister-in laws Helen Heimerl, Mabel and Jimmy Fitzpatrick, Alice and Ben Heller, Marie Fitzpatrick, and Pat and Bea Fitzpatrick; and one niece and one nephew.
We praise God for the many seasons that he gifted to Martha here on earth and pray that the beauty of Heaven brings her His peace.