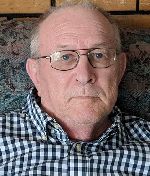 Mark enjoyed spending time with his family, fishing, woodworking and going with friends to breakfast at Broadway B’s in Cokato.

A Memorial Service for Mark Wiederholt will be held on Friday, August 2nd at 7:00 P.M. at The Chilson Funeral Home in Winsted. Frank Claude and Father Joseph Mary will officiate.

A time of gathering will be held on Friday, August 2nd from 3:00 P.M. until time of services at the funeral home.