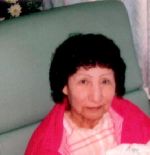 Marion was born on November 14, 1933 to Edward and Annie Chanku. She grew up in the Long Hollow Area, Marion was one of fourteen children. She attended Long Hollow Day School and The Sisseton Public School. After her education, Marion married Norris LaCroix. Marion was the loving mother of eight children, the late Walter (Rita) Chanku Sr. of Sioux Falls; Leona (Kenny) Locke of Aberdeen. The late Morris LaCroix, Patsy (Tom) Nordquist of Wilmot, SD. Judy (Darrel) Amos of Sisseton, SD. The late Gary LaCroix, Ricky (Kelly) LaCroix and Lawson Renville all of Sisseton SD.

Marion worked at Schiltz Foods for several years. She later was employed at SWO Headstart, the Tekakwitha Children’s Home for several years, The Boys and Girls Club of Sisseton, Tiospa Zina’s Kitchen, Super Valu and her latest employment being at The Dakota Connection Casino as a prep cook. She was well liked by all who worked with her. One of her passions was to work hard.

Marion’s many hobbies were rummaging, putting puzzles together, cooking, watching Lifetime, shopping, playing machines at the casino,visiting her children, grandchildren and great grandchildren.

In addition to her husband, Marion was preceded in death by her parents, three sons, and siblings.

Funeral services for Marion LaCroix will be held on Thursday, September 8th at 10:00 A.M. at The Community Center in Old Agency Village, South Dakota.